I decided that I needed to complete my collection with a clock containing the R|Z568M Nixie Tubes from Dalibor Farny.  PV Electronics had an amazing Single Nixie Kit and I jumped at it.  This is what it looks like

END_OF_DOCUMENT_TOKEN_TO_BE_REPLACED

Long ago, before the days of LEDs, LCDs and vacuum fluroescent displays there was briefly a display technology known as the Nixie tube.  A “backronym” standing for (N)umeric (I)ndicator e(X)perimental,  these glow discharge tubes (think fluoresent signs) could display numbers with certain models displaying a limit set of symbols, too.  The former Soviet Union produced and used these quite a bit in things like calculators and scientific equipment.

In more recent years there has been a revival of the Nixie Tube as there are tons of them still sitting in warehouses.  In many cases they are being used in clocks.

I decided it would be be fun to build some of these, both for myself and Gemma but also as Xmas gifts for others.

END_OF_DOCUMENT_TOKEN_TO_BE_REPLACED

I recently read about Nathan Griffith’s Nematoduino, a full brain simulation (all 302 neurons!) of a nematode on Arduino, with great fascination. I thought it was soooooo cool and immediately wanted one of my own. The source code was released, but unfortunately no hardware diagrams came along with the code. I read through the code and determined that H-bridges were needed — I did not have these on-hand. I did, however, have an Adafruit Motor Shield. I decided to adapt Nematoduino for my hardware and I was successful with very little effort.

It was actually very easy to adapt. The author is setting motor speed using 8 bit resolution, the same as an Adafruit Motor Shield would. I changed his motor commands slightly to signal the motor shield in terms of speed and direction.  I made some minor pin selection changes, making pin 13 the indicator pin for the ping sensor.  I also disabled the stop/start push-button switch out of convenience but this easily re-enabled.

I was then able to load up my sketch and enjoy my nematode!

My circuit diagram from Fritzing:

The sketch for my build can be obtained here.

I recently built a new home audio system and decided it would be fun to experiment with vinyl given how trendy it has become.  I should have known right from the get-go that I would I would wind up going a little too far, in typical audiophile fashion.

I had purchased an Orbit turn-table from U-Turn Audio was quickly having all too much fun. I equipped mine with the acryllic platter and Ortofon 2M Red cartridge.   I opted not to get their Pluto pre-amp as my Parasound amp includes a phono stage.   This was great for getting started but left something to be desired, as with many built-in phono stages.

After some research, I came upon the Muffsy Hi-Fi Phono Pre-Amp and Power Supply kits.  I’m pretty handy with a soldering iron and so this looked like a lot of fun.   I purchased the phono pre-amp and power supply and it was shipped in no-time.  I already had some OPA2134 op-amps on hand (the upgrade option) so that was helpful.

END_OF_DOCUMENT_TOKEN_TO_BE_REPLACED

I recently upgraded my home audio arrangement and wanted to be able to stream content via AirPlay.   The seemingly obvious choice was the Apple AirPort Express as it has a TOSlink audio output.  I bought one and found myself listening to a symphony of pops and clicks.   It was unpleasant and totally unlistenable.

As I had used the AirPort Extreme with some success in the distant past I assumed the issue lie with the Parasound Halo Integrated amplifier (which includes a DAC).

Further research revealed that the Apple AirPort Extreme (current generation) is in fact, a piece of a shit.  Its digital output is known to be very jittery and the ESS Sabre 32 DAC in the Parasound is not at all tolerant of this.   I was then left with the question of what to do next.

I did some web searches on the topic and uncovered a company called HiFiBerry that makes a number of audiophile-grade products for use with Raspberry Pi.   I was already familiar with a Linux distro called MusicBox which is a turn-key AirPlay receiver (among other things).

I ordered the HiFiBerry Digi+ Pro and waited anxiously for it to arrive. 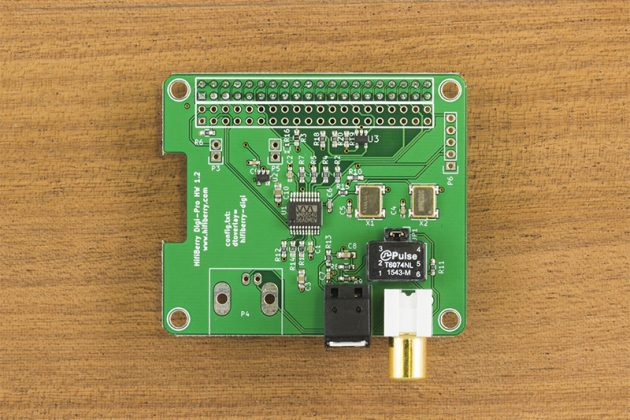 I set it up (which was a breeze) and suddenly I had TOSlink and 75 ohm coax digital connectivity. I opted for coax.   Since then streaming over AirPlay sounds amazing.  I play a lot of lossless content and the performance is flawless.

I recommend this to anyone looking for a similar solution.  My final solution was to use a Raspberry Pi 3 with the Digi+ Pro and HiFiBerry’s steel case.  I am using Ethernet as latency is always better, but I did test WiFi and it worked well for me.

My HiFiBerry setup sitting atop the Parasound Halo.

After building Pi GRRL a few weeks back as a gift, I decided I very much needed one of my own.  I just completed it.

I built it very similarly to the other one, using the Adafruit soft tactile buttons for the DPAD and ABXY keys.  I decided to used the firmer push-button switches for select/start.  I find this cuts down on accidental presses and feels great.

Want to build your own?  Get the kit from Adafruit and a case printed by NateTheApe on Etsy.

I recently decided that it would be loads of fun to build Adafruit’s totally awesome Raspberry Pi GRRL 2 kit.   Ultimately this will be a gift for a family member but I’ll not say anything further on that matter 🙂

This is the story of my build!

END_OF_DOCUMENT_TOKEN_TO_BE_REPLACED

My wife was recently away traveling and I decided that I wanted a project to keep me busy and out of trouble in her absence.   I determined that I would build her a custom clock while she was gone.   I began sketching out my design and found some great parts on Adafruit for my project.

END_OF_DOCUMENT_TOKEN_TO_BE_REPLACED

I was reviewing some of my old drone photography the other day and found a really great shot but the lighting was just a bit off.  My friend Asher Haig was kind enough to tune-up this image for me.

This is another shot taken at lovely Lake Lynn in Raleigh.  I am about 20 feet up over the water and out a ways over the lake.  This photo is from August 21, 2015 and was taken at dusk.

My latest creation came out of a bit of nostalgia.  I used to work for NetApp, a major player in the data storage industry.  During my time there, I used a FAS3020, purchased on eBay, as a learning tool.  I’ve since gotten rid of the filer itself but could not bear to part with the bezel.  It was a souvenir of sorts.

I recently uncovered the bezel in my parts closet and realized that a common 16×2 LCD screen fit the bezel perfectly.  I have many an Arduino on-hand and I also had a DS1307 I2C-based real-time clock.  A short while later, I had it up and going!

I am cleaning-up the code a bit and will then post it on Github.